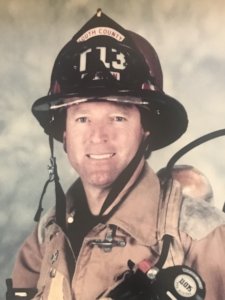 Dan Gadwah, 46, died at Seton Medical Center in Daly City, surrounded by family, friends and colleagues. Dan was a South County Fire Authority firefighter whose battle with cancer inspired legislation that makes it easier for other California firefighters with job-related cancer to receive workers’ compensation benefits.

Instead of giving up hope, the Pacifica man took action, sending letters to government representatives across the country. Because of Dan’s work, Assemblyman Lou Papan, D- Millbrae, introduced a bill to require employers to prove that there is no link between a firefighter’s exposure to smoke and toxic chemicals and the cancer.

Gov. Gray Davis signed the bill prior to Dan passing. “It’s been a long time coming,” Gadwah said days after the bill was signed. “But I think there will be a positive effect in general. When you get sick with cancer, now you won’t have to deal with trying to prove it came from work. You can deal with healing.”