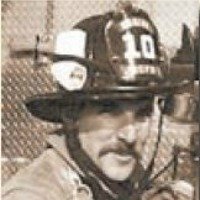 After spending 13 years with the Redwood City Fire Department Captain Robert Walsh passed away as a result of job-related cancer on July 16, 2003. Captain Walsh joined Redwood City after service with fire departments in acifica, Moffett Field and Saratoga. He comes from a family of firefighters, including his late father, John Walsh who served with the Mountain View Fire Department, and also honored on the California Firefighters Memorial Wall.